The irrigator uses the sun to charge the battery which turns the hose reel, retracting the sprinkler. The irrigator can operate using water pressure as low as 20psi. Using this technology, you’ll never need a power point again and there is no complicated hose management.

Designed and built in Australia for Australian conditions,  with efficiency in mind, the GPI features automatic shut off and solar power hose retraction, saving you time and water while keeping your grass green and healthy.

The Solar Powered Travelling Irrigator from greenPRO is so versatile. It’s designed to maintain your pasture, horse arena, crops, nursery, lawn or sports field. Designed to save you time, water and allows you to attend other jobs while the Irrigator does all the work.

The GPI range is the World’s first 100% electric and solar powered irrigation system, the GPI creates it’s own independent water pressure. Each irrigator can perform impeccably with water pressure as low as 20psi.

Unlike other conventional irrigators, all irrigators in the greenPRO range feature a powerful 12-volt motor to rewind the sprinkler which means loss or wastage of water pressure rewinding the hose. The on-board 35AH AGM solar charged battery will power your motor for a full 8hrs without needing to be recharged, allowing unattended day and night operation.

Our Irrigators incorporate smart technology that enables you to pick the duration of the rewind, providing an auto shut-off when the job is done.

Available in three sizes, GPI-150, GPI-100 and GPI-66. This means you get the optimum coverage without constant monitoring, saving you time, water and allows you to attend other jobs while the Irrigator does all the work.

EASY TO USE MULTI-FUNCTION IRRIGATION SYSTEM

The beautiful part of the GPI range from greenPRO is it’s simplicity and its ability to ‘just work’, with no complicated hose and wire management issues. Solar powered, self-adjusting, and versatile enough to be used from pasture to paddock. Now features a Timer on all 3 irrigators. 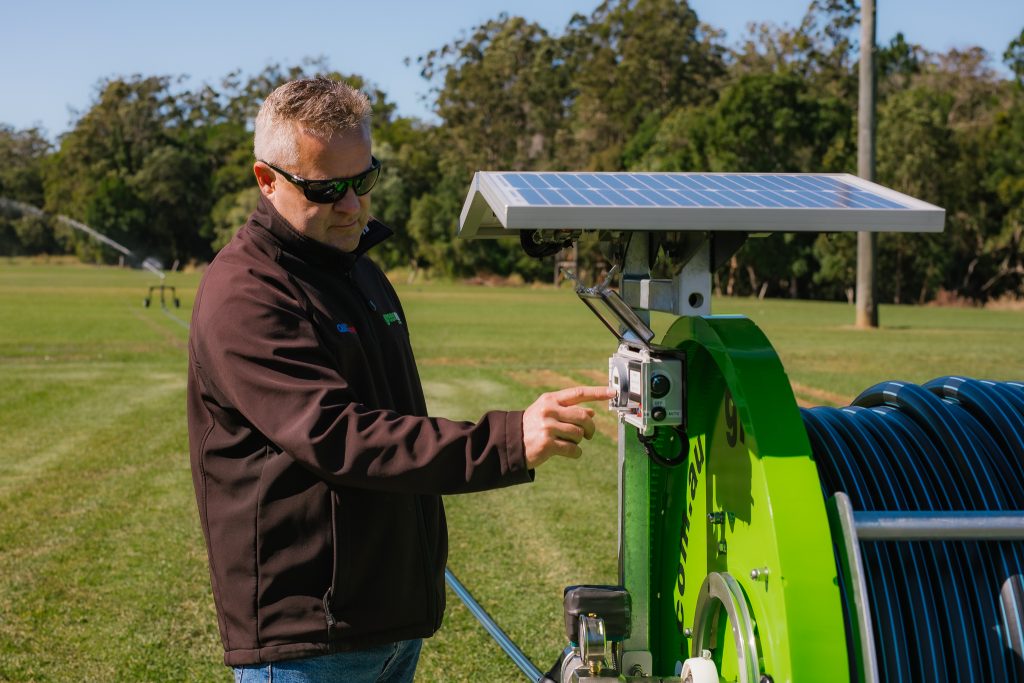 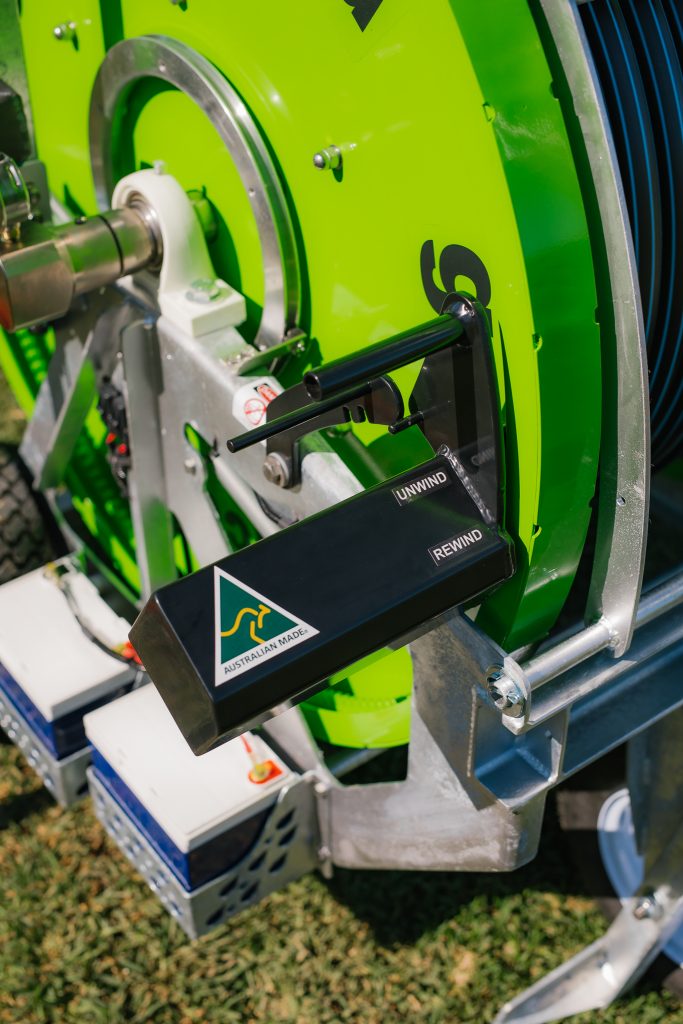 The bult-in variable speed control and smart electronic shut off system switches the sprinkler off automatically based on the duration you choose.

So you can attend to ther jobs while the irrigator works to ensure optimal establishment of you pasture, paddock, field or park, this also allows for night time operation.

Unlike other conventional irrigators, all irrigators in the greenPRO range feature a powerful 12-volt motor to rewind the sprinkler which means zero loss or wastage of water pressure rewinding the hose.

The on-board solar charged battery will power your motor for a full 8hrs without needing to be recharged, allowing unattended day and night operation. 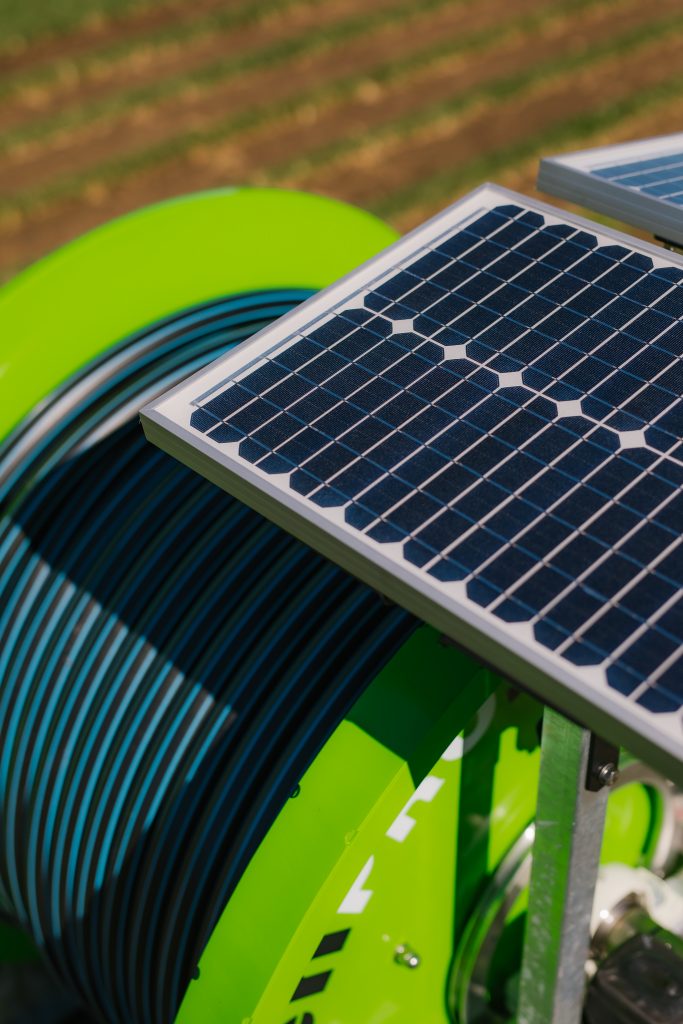 AUSTRALIAN MADE AND OWNED 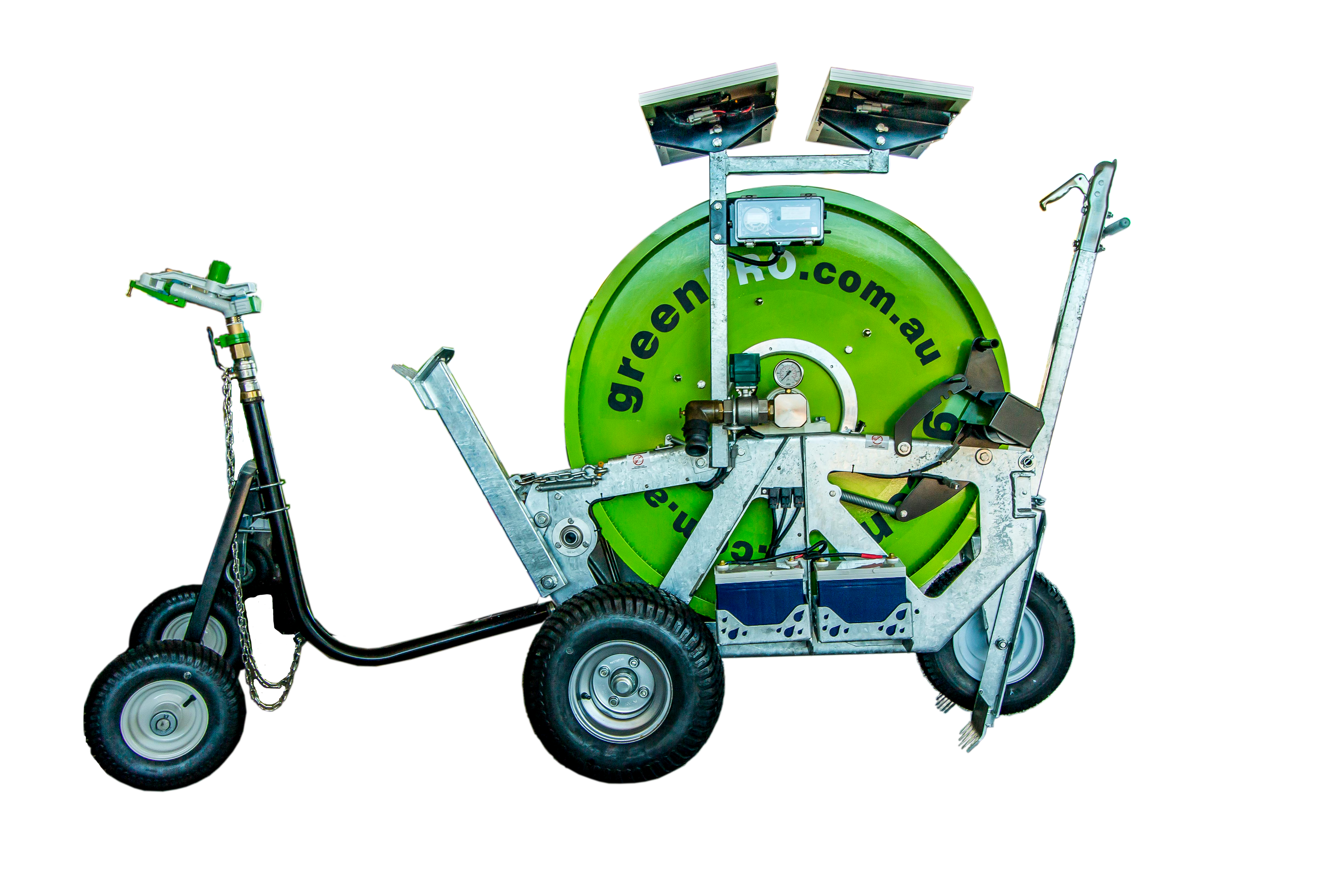 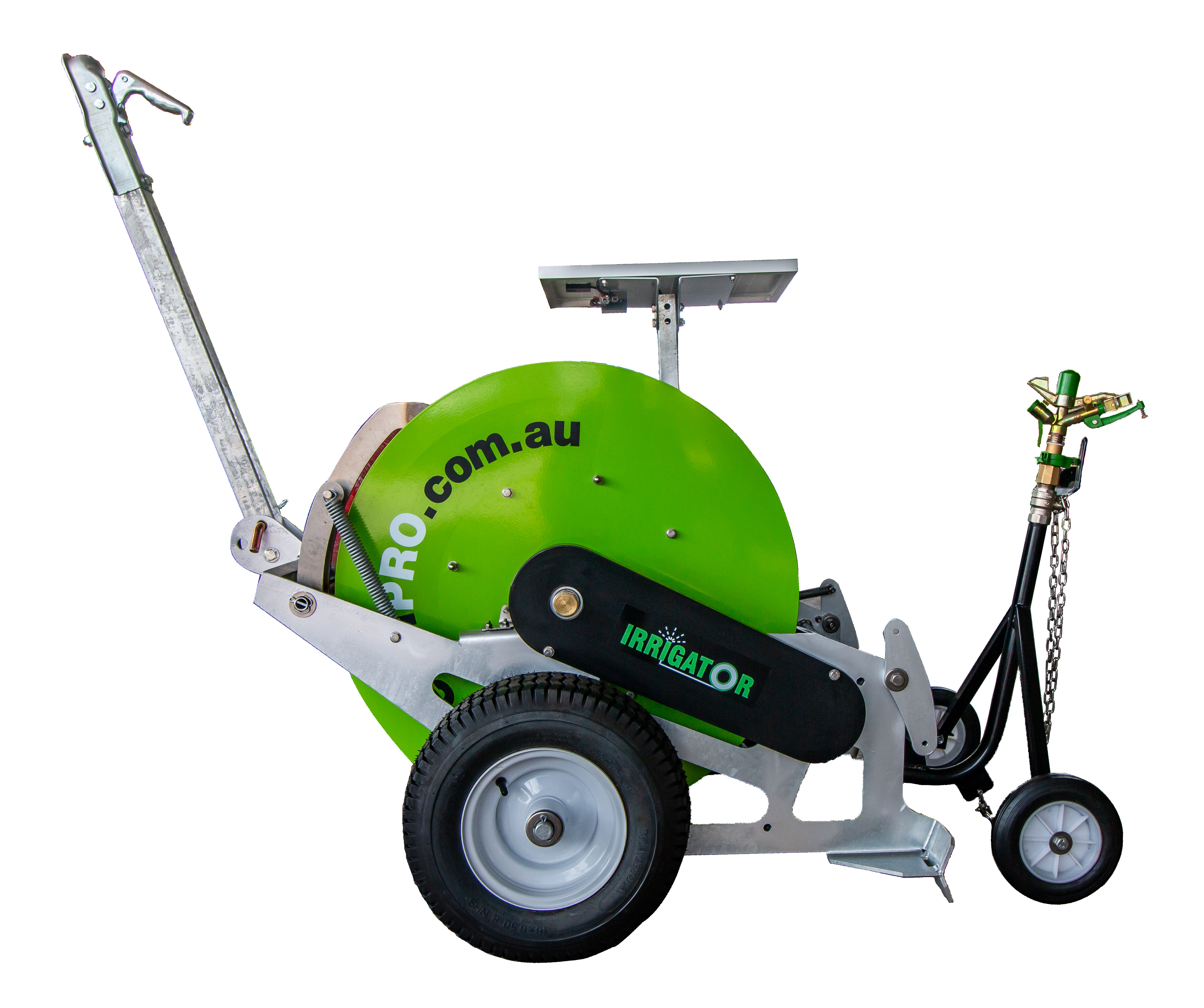 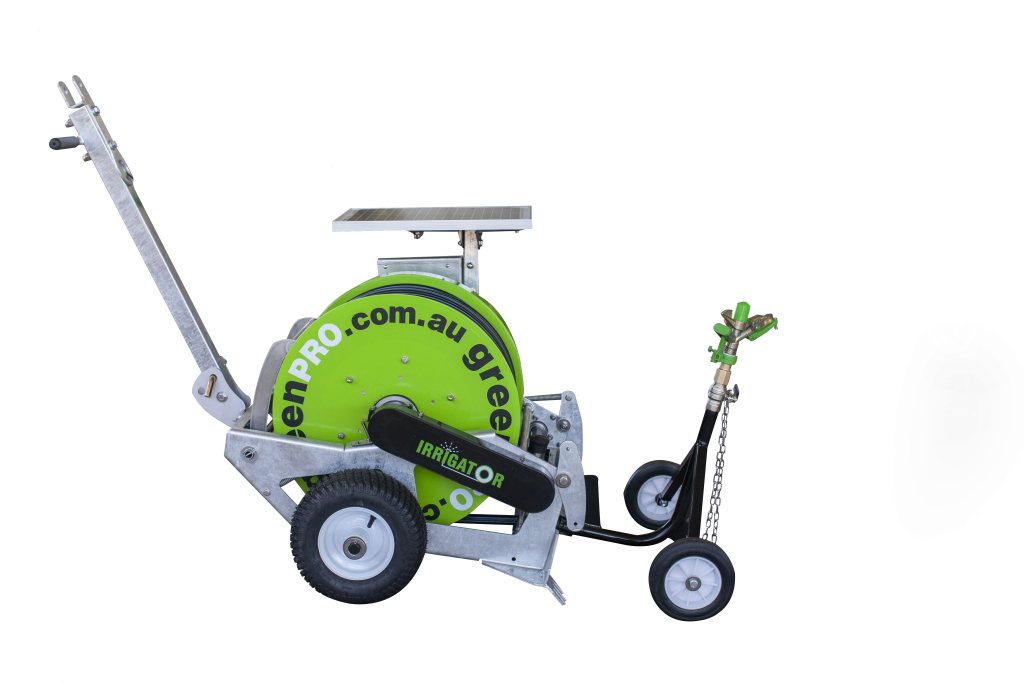 Learn more about the GPI

HOW much spray you get from the GPI Water You Waiting For?

Getting water from point A to point B has historically never been fun. Water’s heavy and has a nagging tendency to escape from your chosen vessel and disappear into the wrong bit of ground.

That whole “water’s heavy” bit has caused a good deal of trouble over the years. Pumping equipment has always been heavy and unwieldy meaning the operator had to be a fairly strapping fellow. And any day he had to water, he could forget about doing anything else! Other duties he was going to handle got pushed down the list, which meant his lands could fall behind in the dry seasons because he was tied up pumping, transferring, and spraying water.

That is – until the greenPRO Solar Powered Travelling Irrigator was born! With a new set of ideas about what irrigation and irrigators should look and be like.  You see, when we started designing irrigators for the farm and paddock 8 years ago, we started with a clean sheet of paper. We put aside what it should look like, and instead, imagined all the tasks it needed to do. The end result?  An irrigation platform unlike any other. Solar powered, self-adjusting, and versatile enough to be used in the paddock, the pasture, or even for fire suppression. The GPI Irrigator received rave reviews by the professionals at the Australia National Field Days … and if anyone has “seen it all” they certainly have.

An irrigator designed to meet every need – not just be pressed into service.  Our Travelling Irrigator is built with a new set of ideas – made almost independent of water pressure, performing impeccably at less than 20 psi! Process management system – both water and wire – controlled with integrated variable speed controls, ‘set and forget’ technology, and an automatic shut off system.

Most importantly? greenPRO’s design is a creation born of the minds and hands of Australian ­men and women who have worked the Land Down Under. The people who know that there is everywhere else and then there is Australia.  Just as importantly, because we know the land, when you have a question about the Irrigator (or any other implement we provide), you get real service from your countrymen – not some call center on the other side of the globe, not some city folks who don’t know a plough from a harrow.

Providing better implements for Australia’s farmers – that’s what we do at greenPRO and our Solar Powered Travelling Irrigator is just another great example.

HEAR FROM A GPI OWNER

“It’s water efficient. easy to use. You can set it up and walk away, it turns off itself ” 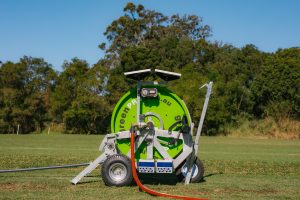 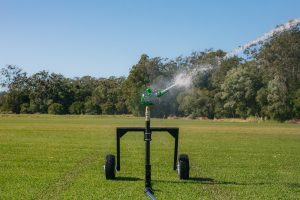 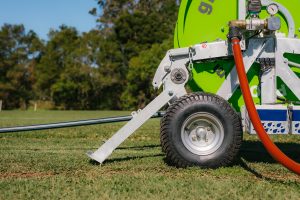 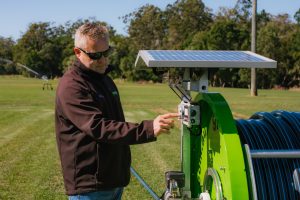 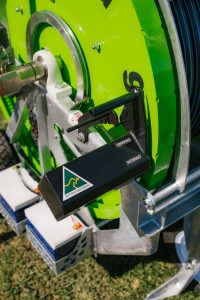 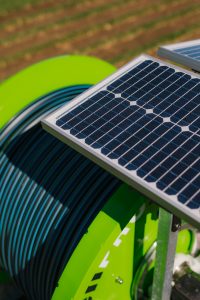 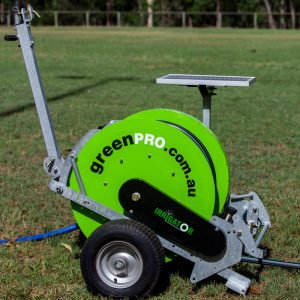 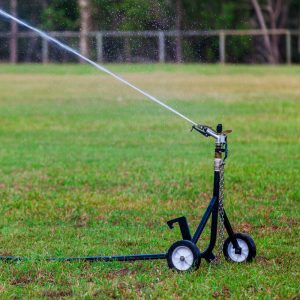